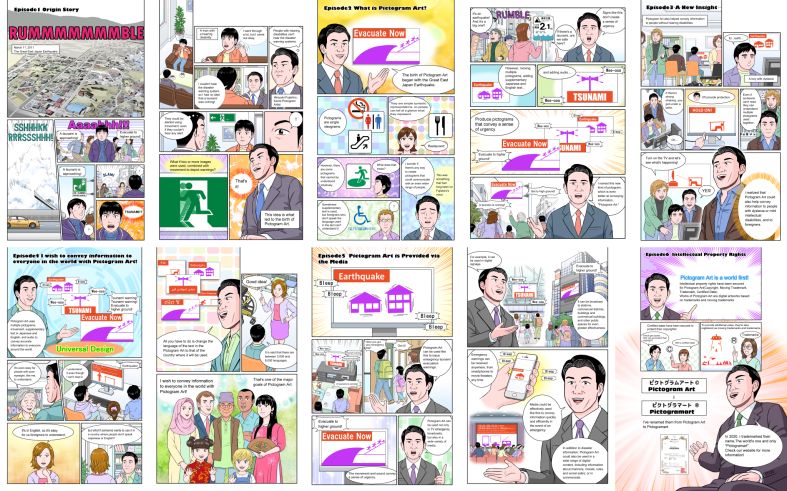 The origin story of Pictogram Art

After the Great East Japan Earthquake, I heard from a colleague who was hard of hearing that he didn’t hear the disaster warning system and was late to evacuate. That’s when I had the idea of using two or more pictograms as side by side still images or in videos to convey information to people with hearing difficulties.
I called this “Pictogram Art,” and began working on its development in earnest.
Of course, Pictogram Art is not solely for use by people with disabilities. The number of foreigners in Japan is rising, and I believe that Pictogram Art is essential as an effective way of intuitively conveying messages in emergencies such as disasters.
See the origin story of Pictogram Art for more details.

The actual Pictogram Art images used in digital signage, smartphone displays, and movie theater screens differ from those shown here.
The actual images have not been used here due to concerns of potential copying in Japan.

Overview of our business operations

We excel at information protection.
1.Licensing for fixed periods, such as one year licenses
2.Sales including rights to original works of Pictogram Art
3.Exhibitions, lecture meetings, writing
4.Pictogram consulting
Disaster prevention and mitigation
Universal design for information
Contact us with any requests.

Thank you for visiting the Pictogram Art website.
We will read all of your reviews and feedback and take them into consideration.

Work requests
Please provide us with details regarding any work requests.